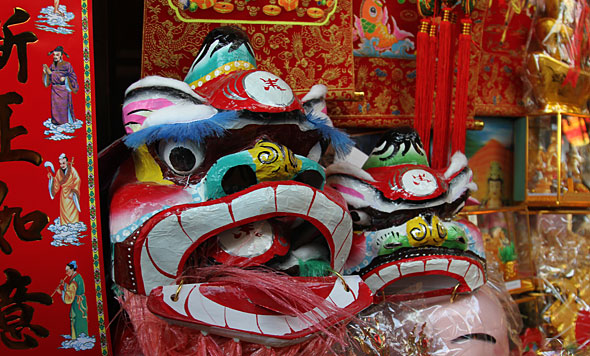 Before I get started on this post I want to give good warning. I did not succeed in my quest in Chinatown. I did not divide and conquer. But I did see red.

The main reason for going into Chinatown wasn’t to see about Chinese New Years. I was hankering to hunt down bunnies. You see, the year 2010 is the year of the rabbit. Asking around, K.Pi thought Chinatown would be the best bet. Me too. Me too.

And honestly, I expected not just bunnies plastered everywhere, but a town transformed for New Years’ celebrations. I was so wrong. Except for red banners down the street and a few extras, it was practically the same ‘ole same ‘ole: hordes of people pushing their way everywhere, not much room to swing a camera, and loads of red. 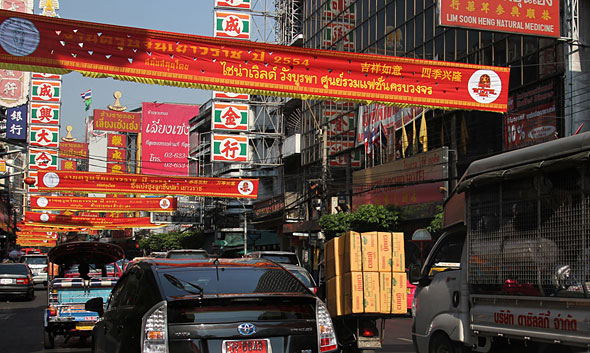 Curious, I asked Greg Jorgensen what usually happens during Chinese New Year in Bangkok’s Chinatown. Greg has resided in Chinatown for donkey’s years, so of anyone, he’d know.

Well, living in Chinatown as an expat during the new year is like living in Calgary as a non-hick during the Stampede, in that you want to keep as far away from it as possible. Truth be told, it’s kind of a nightmare and I avoid it at all costs, but I guess some people might find it charming. 😛

I can’t remember ever seeing any huge statues of animals or anything like that – maybe there are lanterns or hats or things decorated with the appropriate animal, but nothing ostentatious. What you CAN expect is endless, sweaty, heaving crowds of people everywhere you go. The main road – Yaowarat – is closed for foot traffic, and there are stages set up with singing, dancing and acrobatic shows. Food is also a main attraction, but if you do stop for a bowl of noodles you’ll be sitting elbow-to-elbow amid a sea of diners, often as one of 6 strangers squeezed together at a table meant for four. But kids love it – lots of balloons, noise, and candy for them to check out, and it’s certainly not a boring time of year in that part of town.

So basically it’s the same, only louder and with more people pushing and shoving their way through bigger crowds. Hmmm. I’ll pass.

While there weren’t many New Year’s decorations, I did make way for Chinese dragon dancers coming through the crowd. And like crowds everywhere in Chinatown, their concern was not for anyone else but to get where they wanted to go. It was a bit annoying when you are trying to shoot video, and I imagine the dragon dancers were not impressed either. Ah. Scratch that. They are sure to be used to it.

I did find some bunnies but not what was expected. Bunnies were on sale as dangling things and ornaments but Chinatown was bereft of megga bunny decorations on the streets. Oh. Well.

Ok, I also came across small bunny decorated money envelopes. But that was only after hours of wandering around asking anyone who would listen. And when I’m looking, I’m also finding stuff. Yeah. So I spent way more then I’d intended (my little girls are just going to love this month’s care package!)

Unless I’m wrong (and pretty please tell me if I’m wrong about any of this stuff), อั่งเปา /àng-bpao/ is the Thai pronunciation of the original name for the red envelopes you fill with money. And it means red envelope, funny enough. The envelopes are given on special occasions such as Chinese New Year, but the practice of giving money envelopes is no longer just Chinese. When I lived in Borneo even the Malays gave coloured money envelopes during Ramadan, birthdays, and pretty much anything sanuk. And I believe the Malaysians do too. Singaporeans? That’s a given.

And I don’t have a clue what this sack is – do you? – it looks gorgeous and gaudy. I like. 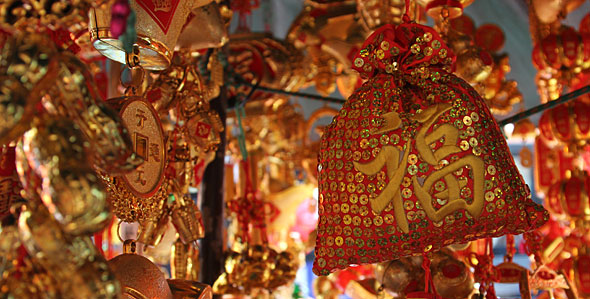 This being Chinatown, anything or anyone decked in red fits the theme. Can you figure out what product these cuties represent? I never did get any because they were too busy fiddling guitars, conferring with each other, and ignoring the public. 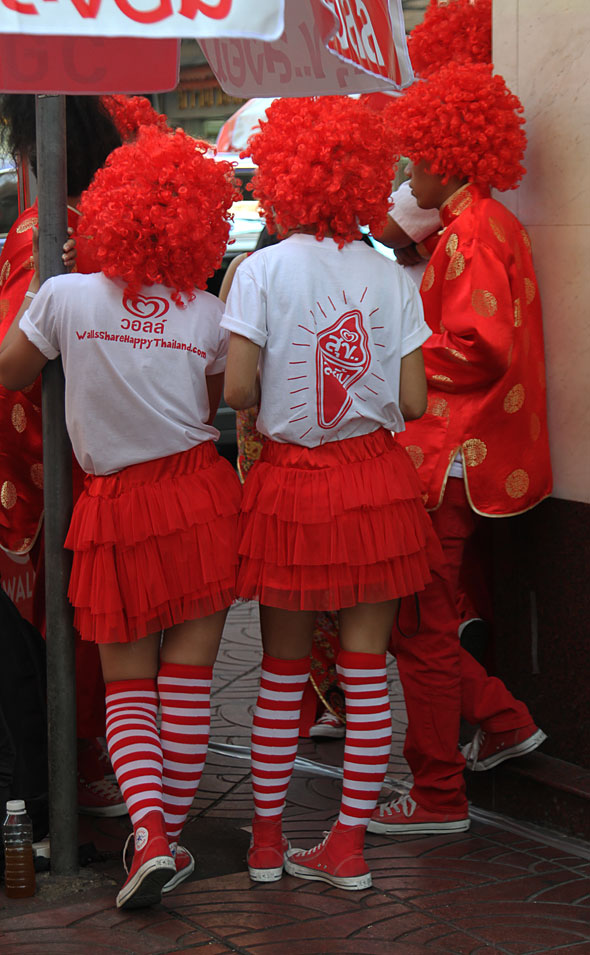 If you are interested in all things Chinatown, there are many sites with decent information about Chinese New Year in Thailand. Here’s one:

And if you want to know what’s happening in Thailand before it happens, my buddy Talen puts a heap of work into his ‘Thai Calendar’ (no longer online). Not everything going on in Thailand is promoted Western-style (as in letting people know before the event), so work really is the operative word here.