What is your Thai level?

I would say I am fluent – but not always. I can speak quite fluently with friends and my boyfriend – about everyday stuff that is. I couldn’t hold a conversation about complicated subjects. In a group conversation its more difficult for me. There I miss a word and then the whole conversation is just one big question mark.​

​I can’t speak much of slang. I know a few swear words – well who doesn’t – but I rarely use them. Most of the time I speak standard Thai. I could hold a conversation with – let’s say – a superior/boss or at work or with an older person and be polite. I know quite some Isaan words and everytime I go to the Isaan region I understand a little bit more, but I can’t speak it at all.

What were your reasons for learning Thai?

​First time I travelled to Thailand with my family when I was 15. I fell in love with the country. I always liked learning languages and after that trip I randomly decided to teach myself a bit of Thai, so I bought a book with CDs and just started. I didn’t have any Thai friends back then, it was more like a weird hobby for me. Strangely enough, I stuck with it, learning Thai on and off until I moved to Thailand at age 19.

Do you live in Thailand? If so, when did you arrive?

How long have you been a student of the Thai language?

Did you learn Thai right away, or was it a many-pronged approach?

​Back then I was 15/16 and just thought I’d try out learning a bit of it. I wasn’t serious about it, it was just for fun. I didn’t continuously study Thai – I’d sometimes study everyday for a month and then not look at it for six months until I felt like picking it up again. I didn’t speak much Thai when I came to live here in 2007. But I had the basics: I knew the important grammar rules (good that Thai grammar is so simple!) and I could read and write. Not well, but I could. It was a great foundation I could build on. Since I moved here​ I have never picked up a book on how to learn Thai again and I never sat down again to study vocabulary like I used to back home. I just read words, wrote down some and tried to remember them as I went.

Did you stick to a regular study schedule?

What Thai language learning methods did you try?

​The foundation of my Thai I learnt with “Thai zum Selbststudium” (Thai for self-study)​. Unfortunately it is in German but I can HIGHLY recommend it for anyone who is German or speaks advanced German. This course consists of 10 CDs and 2 books. By the second book you have to be able to read (there won’t be any english letters anymore). To be honest, I only finished the first book and a little bit of the second. I sold the course (which is quite expensive by the way) to a friend when I moved to Thailand. I felt I wouldn’t need it anymore and I was right.

It also explains the tone rules very well. First I thought it was so complicated but eventually it just clicked. And now when I read a word I know what kind of tone it is. Everyone who is serious learning Thai should master reading and writing. It makes things so much easier pronunciation wise.

Did one method stand out over all others?

​Learning to read (and write) was crucial for me. That also includes the learning and understanding of the 15-tone-rules. In the book I studied (Thai zum Selbststudium) there was a tone chart (below), which was very useful for me to remember them all. I always kept a printout in my wallet.

Below is the English translation. 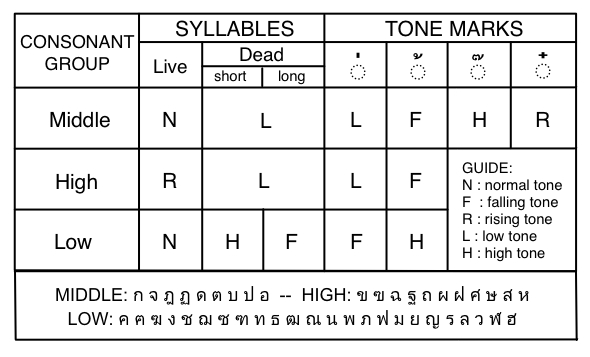 How soon did you tackle reading and writing Thai?

​Immediately when I started learning.

Did you find learning to read and write Thai difficult?

​It did take me a while. I made flash cards to remember all the symbols and ค and ด or ภ and ถ looked pretty much the same for me. But with practise I became better.

What was your first ‘ah hah!’ moment?

​When I came to Thailand the first time after I started studying the language. I was 17 and it was another family trip. At the airport I saw all the writings and Thai signs and thought to myself “Wow, they are speaking my ‘secret language'”. This was exciting, although my speaking skills were very minimal at that point, because I had learnt Thai only from books.

Another ah hah moment was, when I watched a Thai romantic comedy and I could understand almost everything they said (and could even laugh about the jokes, which was even a bigger surprise).

How do you learn languages?

​In the beginning I used flash cards for the letters or just wrote German words in Thai letters. This was useful when I was still in school: I’d write notes on the table for tests and nobody knew what these drawings were.

What are your strengths and weaknesses?

​I don’t study a lot, so I don’t know a lot of “difficult” words. I still get confused or lost in a conversation because I am missing one or two important words. I don’t read much, I’m just too lazy – except the occasional line chat with friends. So I’m not great with difficult topics and I’m too lazy to read actual Thai books, although I have tried before. I’m not a fluent reader.

With everyday conversation I’m pretty good though. I could say pretty much all I’ve written in this interview in Thai. I could write it, too, but it would take too much time.

What is the biggest misconception for students learning Thai?

​Mh. I’m not sure. Maybe that reading and writing isn’t as important as speaking? For me it really made all the difference.

Can you make your way around any other languages?

I learnt Spanish in school, but I forgot all about it. I want to learn Japanese… but there’s no time. For now I will just keep living in Thailand and picking up Thai language as I go. It’s a never ending process.

Were you learning another language at the same time as Thai?

​When I was still in high school I had English and Spanish. I remember sometimes I wouldn’t be able to remember the Spanish word, but I’d remember the Thai word instead or vice versa. Didn’t happen with English, as my level of English was higher. But in Thai and Spanish I was still a beginner.

What advice would you give to students of the Thai language?​

Learn how to read! It’s a tedious task at first, but it gets easier and makes things easier. Especially for people (like me) that remember things better when they write them. And also learn the tone-rules for reading. There are like 15 of them, but they can easily be summed up into a chart for overview (see attachment). When you’re just starting out, I’d recommend sitting down with a Thai person and pronouncing the alphabet several times, until you get it right. It’s good to have the basics first before getting down to learning how to communicate.