Only a handful of Thai courses are highly thought of, and David Smyth’s Teach Yourself Thai is at the very top of that list.

When I asked polyglot Stu Jay Raj which books he’d recommend to students of the Thai language, David’s Teach Yourself Thai was the only course mentioned. And if you remember, Luca Lampariello (another polyglot), explained how he uses the series for his method described on WLT: An Easy Way to Learn Foreign Languages. There are many more kudos aimed at TYT, but I’ll stop here for now.

A heads up: Due to David’s generosity, I ended up with an extra boxed set of Complete Thai: Teach Yourself Thai. If you want to win one of your own, please read on.

When I sit down to write a review, I first check the contents to see what’s on offer. And skimming down the list below, you can see that Teach Yourself Thai is designed to continuously reinforce each lesson.

To make sure the necessary subjects are covered, I also spend time with the chapter contents. 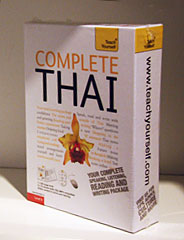 I’m not going to go over each aspect of the course, but I would like to bring up the above mentioned 400 word vocabulary list.

The early stages of learning a tonal language such as Thai can be rough because everything is new. But with learning most any language, we are told that communicating at a basic level is possible with a bare bones vocabulary of 500. Fine. I buy that. Sort of.

Bottom line: David’s course is designed to teach students how to use 400 of the most commonly used Thai words (yes, I peeked – and yes, there are more than 400).

So there you go. The top 400 must know Thai words = an important selling point of David’s Teach Yourself Thai Complete.

Going for the quotes…

For comparisons, I do have the earlier version of Teach Yourself Thai. But instead of explaining the differences to you, I thought it more beneficial to ask David Smyth for a run-down of his updated work.

I like to think that there have been a number of improvements. The first and second editions had 2 long dialogues in each unit, which was the standard format for all Teach Yourself language books. The result was that the dialogues were rather long and sometimes contained too much vocabulary and grammar for the learner to take on comfortably in one section. In the present edition, most units contain 3 or 4 shorter dialogues which, I hope, makes the content easier to absorb.

Another significant difference is that Thai script is now included in the language notes, with example sentences now appearing over 3 lines, in Romanized Thai, followed by Thai script and then English translation. This means that there is now more Thai script in this edition than the previous one. By covering up one or two of the lines, users can use the examples to test themselves on their reading and writing. I was really pleased that the publisher recognized the value of this revision, even though it is not the most efficient use of space on the page.

Other changes include revised ‘insight’ notes, a ‘key points’ section at the end of each unit, more pronunciation exercises, replacing some unwieldy dialogues (e.g getting to the Reno Hotel in a samlor, and buying four 12-baht stamps) and updating with words like ‘internet’ and ‘Suvarnabhumi.

No matter how many times you proof read a book like this, there are always misprints and errors that slip through. If any users notice errors and care to inform me at

Polyglot Geoffrey Barto from Multilingua (and others) recently wrote a review of the Teach Yourself Complete update.

With Teach Yourself Complete, it feels like some real strides have been made. There seems to be more emphasis on content and doing something with it and less emphasis on puzzling things out by means of vocabulary lists.

If you take up the whole package – text plus CDs – and load the CDs on your iPod, you wind up with a fairly handy program for learning [ ] 5-15 minutes at a time. If you’re short of time, you can do one dialog. If you’ve got half an hour to kill, you can make it halfway through a chapter. In either case, you should start by listening, then turn to the book to make sure you’ve understood. In this way, for the first time, you can really use a Teach Yourself course to learn a language by ear while having a text as a fallback, instead of the other way around.

And as Sophie (regular visitor and fellow hermit) is presently learning Thai via TYT, I asked for her opinion as well.

I cannot say enough positive things about Teach Yourself Thai by David Smyth. I have been trying other resources and I have to say this one works the best for me and is my absolute favorite. It is the one I will be using. Why?  Because it is so wonderfully well written, clear, and easy to understand. 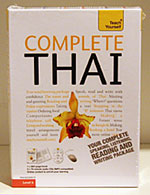 I love the way the lessons progress and build upon each other. He puts it all together as far as the study course. Read, write, listen, and repeat, repeat, repeat. The audio is clear and easy to understand and I love the voices of the people he chose to use. If I don’t care for someone’s voice it is extremely hard to listen to them. I like the way he gives you a road map of how to draw the letters. I love how he explains everything so well and it is actually interesting to read and certainly helps one grasp the reason behind it all. I am so new to learning Thai but his book truly makes me feel like I can definitely do this.

How to improve this course…

As I mentioned – or did I? – I believe that Teach Yourself Thai is one of the top courses for beginners of the Thai language. But even so, improvements can be made.

If I were to shoot for the moon, I’d also like flashcards with sound, online games, etc, to compliment this course.

Now, this next point I’m making is not about improving the course, but a heads-up. The transliteration targets some British speakers and you might be confused when the audio files are not what you expected. So when you come across fuzzy spots, perhaps write down what you believe you are hearing? Just a thought.

Where to buy Teach Yourself Thai Complete…

When Teach Yourself Thai Complete first arrived in Bangkok, it was the book only (no boxed set with audio files). A few weeks later, the entire package appeared at Kinokuniya. It was total weirdness back then so I’m guessing that the delay was due to the Red Shirts taking over our shopping district.

For online stores, Amazon has the product at their UK branch: Complete Thai: Teach Yourself (Book/CD Pack).

Now about that contest…

When I decided to review Teach Yourself Thai, I bought a copy at Paragon. And when I contacted David for a quote, I was sent another copy (thanks TY!) And now one of those copies is up for grabs.

To be included in the draw, the rules are simple.

Each comment gets counted, so go ahead and leave as many as you like. But the comments must add to the conversation as well as pertain to this post. So ‘cool’ ‘great’ ‘rad’ on their own do not count as comments. Nor does, ‘this contest is really really fab and I really, really, really, wanna win a copy’.

The draw will run a week and be over on Thursday morning, 8am BKK time. I will number the reasonable comments and email the total to Kaewmala (Thai Women Talks). Kaewmala will throw the numbers into a beautifully coloured bowl, stir them around a bit, select one, and then announce the winning number in the comments below. Ajarn Pasa (Tweet Yourself Thai) will come in with the name that matches the winning number.

And that’s it really. If this draw goes well, I will consider a repeat as I’m sitting here with dual copies of a number of Thai courses and resources.