The new year is almost here…

It’s that time again: New Year’s resolution time. And this year I am serious about using the opportunity to ramp up my Thai language learning. Because even with the best intentions, it seems that I can find the time to do everything except for my Thai lessons.

Let’s see… This past year I searched for Thai language learning resources, researched and wrote posts for WLT, traveled here and there, learned a bit of photography, and teamed up with the FSI project. But I did not make a concerted effort to focus on my Thai studies. My bad.

I am not a total slacker, but I really do need to make my Thai language studies a priority. Besides, the whole point of starting WLT was to concentrate on my Thai studies, so getting the lead out is a must (especially as last year’s lead felt like a dead weight).

So I did what I do best. I exercised my google finger:

Steve Pavlina is on to something with his 30 day trial idea. Depending on where you get your advice, it takes anywhere between 3 weeks to 66 days form a new habit. That means that Steve’s thirty days will either get me there, halfway there, or not. We’ll see.

Steve Pavlina: One of the best ways to kick off the New Year is by starting a 30-day trial of a new daily habit or activity. Instead of creating a New Year’s Resolution that probably won’t stick, just commit to a short-term change. Make a January resolution only. If it doesn’t work out, you’re completely free to abandon it on January 31st, but for the first 30 days, use every ounce of resolve and self-discipline you can muster to stick to it, whatever it takes. At the end of the 30 days, you’ll be in a great position to decide whether you want to commit to a permanent change, having 30 days of success behind you.

And I can’t believe my good luck. When searching for advice about using Steve‘s 30 day method, I found a post on the how-to-learn-any-language.com forum by another language learner, emk (not his real name, obviously). He used Steve’s method for two years, successfully.

I contacted emk for permission to republish a part of his success story, and he agreed. Thanks emk!

emk: I studied several foreign languages in school, with predictably poor results, and tried to learn Italian on my own. When I studied Italian, I made it about 2 weeks into the course, and wound up with a nice accent and a ~100-word vocabulary. This was useful when traveling, but a bit limiting. My study skills, in other words, were well-suited to the length of a school term, but I never really had the sheer endurance required to learn a second language.

This isn’t a regular language-learning technique, such as shadowing, L-R or using an SRS deck, but more a “meta-technique”: A technique that helps you use other techniques more consistently. If you already have adequate self-discipline, this story probably won’t interest you. But if you tend to get half-way through a project and then move on to something else, you might find these tricks useful.

I was inspired by two stories:

As of today (November 2009), it’s been a bit more than 2 years, and I’ve studied French every single day since I started. I can read popular non-fiction in French, and—if I pick the right book—I typically miss about 0–6 words per page. I can talk with my wife for an entire day in French, and I’m just starting to be able to understand the news on RFI.

Here are some tips based on my experience:

If, like me, you’re motivated to learn a foreign language—but fear that you’ll get bored and give up—then you might want to read the two blog posts I linked to above, and consider a 30-day trial 🙂

Read the unabridged version here: Start the New Year With a 30-Day Trial

What emk and Steve are suggesting ties in sweetly with Luca’s language learning method. If you have not had the pleasure, below are Luca Lampariello’s two recent posts on WLT: 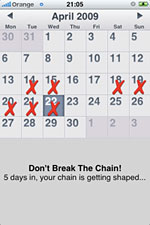 One of the inspirations emk mentioned is the Seinfeld calendar. What you do is acquire a wall calendar that has all 12 months on one page, stick it on a high traffic wall, and then mark each successful day with a red X.

The continuous chain of X’s are supposed to motivate you to keep going with your resolutions.

Sounds good to me.

If you have an iPhone, there is an app called Don’t Break The Chain! You have a choice of a free app with ads, or a US$4.99 version without ads.

For those without iPhones, there are online calendars: Don’t Break The Chain! is good.

I have not tried either (yet) so please let me know if you do.

And if you don’t want to keep an eye on your chain via a website or with an iPhone, you can always download these two beautiful calendars: Seinfeld Calendar.

The pdf’s print out on A4 or Letter, which are a perfect size for the fridge door. I’ve printed two and taped them together for separate goals: Thai lessons and using my Air Walker. I just might add a secret third…

I also found a sample spreadsheet for 2007: Don’t Break the Chain – Spreadsheet Version. It is especially suited for those with more than one resolution to follow.

In Tomas’s post, he mentions printable calendars at ePrintable.com: Free Printable Calendars you can make customise and print.

So there you have it. A selection of calendars on your iPhone, online, in Excel, and printable as well.

Making (but not breaking) a New Year’s resolution…

I’m going for it. Absolutely. Following emk’s lead, I’m headed for thirty days of Jerry, Steve, and Luca. And if you want to go for it too, I’d really love have you along for company. Baring that, I’d appreciate your support.