Translating Thai Song Lyrics: How I Do It, and You Can Too!

Translating Thai Song Lyrics: How I Do It, and You Can Too!…

Hi, It’s Ann Norman of CarabaoinEnglish.com. I’ve made it a project to translate as many Carabao คาราบาว and Aed Carabao แอ๊ด คาราบาว songs into English as I can before I die or get bored, whichever comes first.

I’ve finished about 150 songs out 1,000+ existing songs (more are being written each week). I’m having lots of fun and I’ve decided to share my translating secrets with you, so you can have just as much fun translating your favorite Thai songs into English.

Step 1A: Google for lyrics and plug everything into Thai2English.com…

Goggle for lyrics using the song title and name of the band, which you have copied and pasted from a YouTube + “เนื้อเพลง” (lyrics). The band I follow is famous, and the lyrics are almost always online.

If you are looking for a solid resource to learn Thai online that can help you read Thai within two weeks, check out Learn Thai from a White Guy. They’re currently running a Black Friday promotion, givng you a 40% discount on all of their courses until December 2, 2020.

Next plug your lyrics into Thai2English. This word-by-word translation program is WONDERFUL and the only reason I can do any of this. It is also very glitchy.

Read the output and be prepared to mentally override half of what comes out, especially homonyms. For instance, my Thai2English guesses that each instance of ตา (“dtaa”) probably means “grandmother.” (In song lyrics, it almost always means “eye.”) The program is also easily confused by the word ได้ /dai/ when it does not mean “get or receive” but instead plays a grammatical role in the sentence–as it so often does.

So plug in your lyrics and read the Thai2English output with your brain in gear, combining their huge hints with your existing knowledge of the language.

Step 1B: Re-divide the words in the Thai2English box…

When output is nonsensical, help the program by breaking up the words yourself, and try again. Run the words through in different groups.

Unfortunately it can also work the other way. Two words you totally understand as separate words can go together to make a new word or meaning that you don’t know. Just recently, I discovered that ก็ /gor/ and ตาม /dtaam/ (“also” and “follow”) go together (ก็ตาม) to mean “no matter.” Thai2English will make wild guesses about which sets of words go together. Redivide the words into different sets and see if that gets you a more sensible answer from Thai2English.

And watch out for tricky divisions like “mai bliap mai blong” used to mean “mai bliapblong” (I am using my made-up word in this example). Below are some examples of this pattern from actual song lyrics:

Throughout, keep in mind this is POETRY; the songwriter will be playing with words—to make a joke, to be alliterative, to surprise.

Step throughout: Decipher any English loanwords…

A long word that doesn’t sound very Thai probably isn’t. And it might be English. Close your eyes and relax; the answer might come to you. My favorite example: In a song titled “Santana Carabao” (referring to the bands Santana and Carabao): I had the mystery line:

The English loan words “hippie” and “rock and roll” were easy to hear, and I quickly got: “Hoo-satook” told the story of the path of music: Hippie, rock and roll.

But who or what is “hoo-satook”? The answer came to me days later as I watched a tribute to Carlos Santana on a music awards show. I learned that he had achieved stardom playing at the famous music festival … (I’ve written it here backwards): “kcotsdooW”. 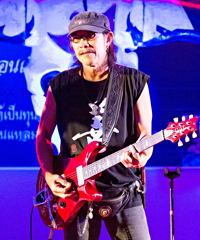 This is a really slick TRICK. Take your mystery words and phrases to google images and see hundreds of pictures of what your string of letters might mean. And prepare yourself for anything. Because maybe Thai2English hid the meaning of these words from you for a reason. I have unwittingly requested images of “shot in the head,” “trampled,” and “crotch itch” in the process of translating Carabao songs.

And yes, the word “crotch itch” (สังคัง /sang-kang/) appears in several Carabao songs, probably because it is alliterative with the word “society” (สังคม /sang-kom/). So these words can be paired to good effect in a protest song: “อนาถหนาสังคมสังคัง” “Pitiful diseased society!” (Or something . . . I am open to suggestions!)

Googling images is the only way to go when your song mentions an exotic tree, flower, or food that English speakers have no name for. Even if you can’t explain your findings to the next person, at least you will know that that tree in this song has bright orange flowers, or that the snacks Aed Carabao is singing about his mother making are those Chinese kanom with mung beans in the middle.

Google images is the only way to match proper names to faces or brand names to products.

My favorite google image translation story: I was translating the lyrics of a brand new, song—a gorgeous melody with just voice and piano, called “Yaak Daiyin” ([What Words Would You] Like to Hear?]:

The verse was falling out beautifully:

“We have mountains, rivers, and oceans. We have all kinds of animals sharing the habitat. There are humans, there is you and me. Here is paradise: the one and only world right here. They say that our world is equal to the tip of the mustache of a shelled slug . . . . “

YIKES! It seemed all the poetry had come to a screeching halt with the mention of the mustached slug. But, then I thought, “He says ‘They say . . .” so it’s a saying. There WILL be pictures.” I googled “tip of the mustache of a shelled slug”: ปลายหนวดหอยทาก.

LOOK AT THOSE little translucent balls on the tip of the antennae of the snail! And, no, they are not really antennae. A mouth is in the middle, so why not call it a mustache? And so, like magic, the rest of the verse falls out:

“They say that our world amounts to the tip of the antennae of a snail, that life is cheaply tossed away like a cigarette butt. We must learn about our hearts and minds; release the spirit to cross the bridge to freedom.”

Step 4: Google the meaning of a word IN THAI and read the answer in Thai..

Note: if necessary, use Thai2English.

In this case the Thai dictionary online says: “ปรากฏให้เห็นชั่วประเดี๋ยวหนึ่งก็หายไป เช่น แสงไฟจากรถดับเพลิงแวบเข้าตามาเดี๋ยวเดียวแว็บไปแล้ว. ว. อาการที่ปรากฏให้เห็นชั่วประเดี๋ยวหนึ่ง เช่น ไปแวบเดียวกลับมาแล้ว เพิ่งมาได้แว็บเดียวจะกลับแล้วหรือ.” Running that through Thai2English (and my brain), we get: “To appear for just a moment and then disappear, for instance the light from a fire engine ‘waep’s’ into the eye for just a moment and then ‘waep’s’ away.”

There! Aren’t you glad we did this like a Thai, and got the full definition? (And if you are really ambitious, search Thai Wikipedia for whole articles relating to your song or its theme.)

Step 5: Beg help from your friends…

Be humble. You are never going to get to the end of this foreign language learning. This is especially the case with proverbs and sayings. There is too much context and history that you are missing out on. There are random-sounding expressions that come to mean a thing for reasons no one can remember. Why does “putting on airs” mean “pretending to be higher class” in English? I don’t know and it’s my language. So go check your translation with the experts, and be prepared for the possibility that your best guess was wrong. And don’t feel bad. It is already very satisfying to just get 85% or 90% of the way to understanding the songwriter’s intentions.

Step 6: Your mystery word might not mean anything, and the odd metaphor is open to interpretation…

A Thai friend recently told me, “In your translating, you might see that many words you can’t find because they are just put in without meaning, but it makes a beautiful sentence!” This is music, this is poetry. There are pretty-sounding words thrown in. There are vocalizations: the ooo’s and ahh’s and la, la, la’s.

Ponder the metaphors but don’t get frustrated with not knowing. Neil Young was searching for a “Heart of Gold.” Aed Carabao famously loves that song. In a recent concert at Khun Aed’s home in Chaing Mai, in the patter between songs, he mentions that although he is a big admirer of Neil Young, he never got to meet him. And if he were to meet him, he’d love to ask him one question: “’Heart of Gold,’ is the meaning like a person is searching for the value of the heart, or something like this?”*

Then he launches into a perfect cover of “Heart of Gold.” When I first watched the concert DVD, I was stunned: Did pondering this question provide Khun Aed inspiration for his even better song “ทะเลใจ” /Telay Jai/ (Ocean Heart), which IS about a person coming to terms with their own heart so they can be happy?!

At that moment I decided never again to apologize for only halfway understanding a song.

In turn, I’m not sure I completely understand Aed Carabao when he sings about the little bird drifting and bobbing, blown by the wind, till it unfortunately falls into the center of the ทะเลใจ.” But I LOVE IT!

You are close enough. Don’t overanalyze. Play the song. Listen closely, hum, bounce, and sing along, and let the movie play out inside you.

*The concert is “วันวานไม่มีเขา” /Waan Wan Mai Mi Kow/, the Exclusive Concert at Aed Carabao’s home in Chiang mai. You can listen for yourself at 1:16:4 of this video: