Thai is both voiced and voiceless…

In my previous column, I explained “contrasting” and “non-contrasting” sounds as well as aspirated and unaspirated sounds in Thai. This week, we’ll discuss another important distinction in Thai: “voiced” and “voiceless” sounds.

To briefly recap, those sounds we consciously distinguish are called contrasting sounds. Other times, there are multiple sounds that our brains automatically group together as one “sound”. That is, our brains aren’t trained to hear the difference. These are called “non-contrasting” sounds.

An example that illustrates the difference between voiced and voiceless sounds is “th” – the scourge of all non-native speakers trying to master English. “Th” can be one of two sounds, as in “this” and “thin”. Pay close attention to the first sound of each word. When pronouncing “this”, your vocal cords vibrate, but when pronouncing “thin”, your vocal cords don’t vibrate.

You can even feel the difference when you place your fingers on your neck while you make these sounds. Don’t be fooled by the vowel “i” immediately following the th-sound. One of the characteristics of all vowels is that making them always causes the vocal cords vibrate. Focus only on the initial consonant sounds, you can tell the difference.

Other words that begin with voiced-th are that, there, then, and though. For voiceless-th, we have words such as think, three, thimble and through. Proper English pronunciation requires you to distinguish the two. It just so happens that for native speakers, it’s a subconscious distinction.

There are many voicedvoiceless pairs in English. Many of them are contrasting sounds, so we don’t even realize that the only difference between the two sounds is the vibration of the vocal cords. These include s and z (“sit” and “zit”), f and v (“fan” and “van”), and ch and j (“chain” and “Jane”). Your pronunciation may vary slightly, depending on your dialect. 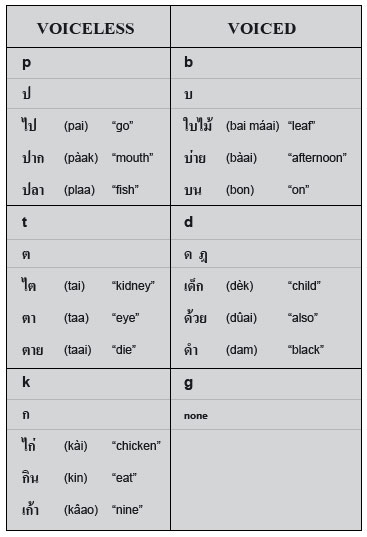 In Thai, there are only two voiced sounds, but they confuse many people: b and d. Combined with aspirated and unaspirated consonants, they make a threeway contrast in Thai. English has only two.

The table to the left will help you sort out the difference.

One sound not found in Thai is the English sound “g”. Many phrasebooks use g to spell Thai words, but this is one of those misleading downsides of Romanized Thai.

The first letter of the Thai alphabet is ก ไก่ /kor kài/. It is a “voiceless” sound. In English, g is voiced. It’s a subtle distinction, but it is there.

The correct sound of ก ไก่ is one of those non-contrasting sounds in English, only found in words such as sky and ski. In that context, our brain groups it with k. In Thai, since there is no English g sound, it’s tempting to just let g fill in that gap, rather than learning to say the ก sound properly.

If you pronounce ก ไก่ like English g, it’ll sound wrong to Thais, even if they can’t explain why. Think of, say, Dracula. It’s like you’re saying, “I vant vun order of chicken fried rice.. mua ha ha”. Only no Dracula laugh.

Then again, maybe that’s why they put all that garlic in the food.